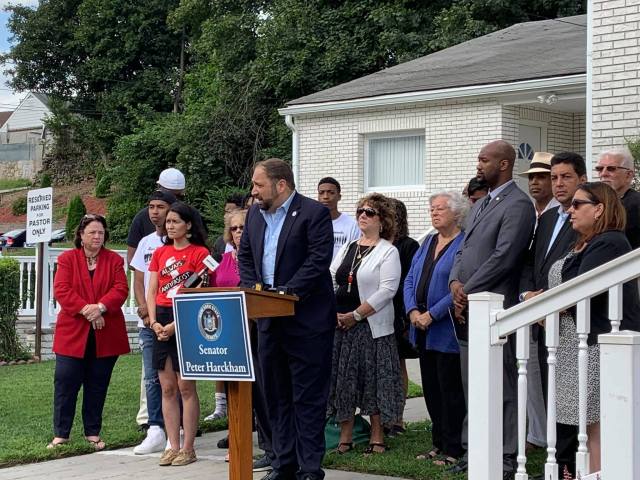 Sen. Peter Harckham and Peekskill Mayor Andre Rainey invited me and other local leaders to the Mount Lebanon Church on Sunday to respond to a white supremacist sticker and other signs of hate that have shown up in the area in recent months.

The sticker was found last week on a store in Peekskill, plastered on top of the store’s pride sign.

Hatred anywhere is a threat to tolerance everywhere.  Thank you to Mayor Andre Rainey, Senator Peter Harckham, and the Mount Lebanon congregation for organizing such a strong united front against bigotry.

The troubled individual behind this act of vandalism should know that they have failed.  In trying to divide our communities, they have only succeeded in uniting us. We’ve learned the lessons of history: appeasement only emboldens extremists. We will not turn a blind eye towards prejudice and allow it to grow and spread.

In recent years, an embittered minority has lashed out in dramatic and sometimes deadly ways.  However, this small-minded bigot’s attempts to stir up hate will ultimately be useless in the face of a unified majority committed to equal rights and social justice.