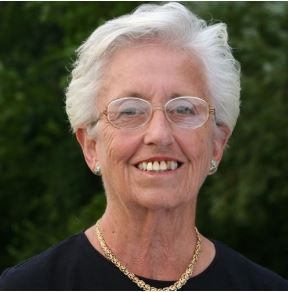 the Editor,
This Spring, residents will have a new park to explore and enjoy. After widening the entrance and providing for parking, Gouveia Park will be open for visitors. Gouveia Park is essentially a passive area with opportunities for picnicking, walking, and otherwise enjoying nature. This first year of being open will give visitors a chance to envision future uses. Its natural contours provide a grassy amphitheater possibly lending itself to small dramatic, musical or art presentations. The Trails Committee will find an opportunity to expand our trail system leading to a promontory overlooking the Hudson. The diverse topography and ecology of the park lends itself to nature study. Schools and pre-schools may find it an exciting and educational opportunity. While the house will not be open until it meets ADA requirements for access, the remaining approximate 15 acres of property are as wide open as your imagination.
As with all new parks and acquisitions, its best uses will evolve as residents utilize its resources. Our residents are never short of ideas. This Spring that process will start. Be sure to visit Gouveia Park once it opens and let us know your ideas. 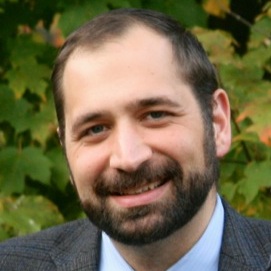 At the start of this year, the NYS minimum wage increased to $10 (and will now gradually rise to $15/hour by 2021). The Village of Croton, as a local government is not required to pay the state minimum wage due to a loophole in state labor law.

Some local governments such as the City of Rochester, City of Syracuse and the State of New York itself have pledged to voluntarily pay all workers state minimum wage or better. Croton is not one of these local governments.

According to Village records, some Village workers were being paid as little as $8.25/hour as of June 2016. For comparison, the inflation-adjusted value of the 1970 minimum wage would be over $12/hour in current dollars.

If part‐time Village workers were paid a minimum of $10/hr, it would cost approximately $13,000–raising the pay for dozens of summer employees that serve as lifeguards and camp counselors and a pittance compared to the $19M proposed budget. Indeed, the $13,000 needed to raise wages for part-time workers is substantially less than the cost of the proposed raises for departments heads, which totals more than $20,000.

That is not necessarily a criticism of the individuals slated for raises in the proposed budget, but clearly money for raises. Indeed, Village staff in most departments and in most job titles can expect raises under the proposed budget. The question is why can’t any funds be found for the frontline workers responsible for the many Croton children that take advantage of offerings from the Recreation Department?

It remains a mystery how the majority on the Village Board of Trustees cannot find the money somewhere. It is even more baffling that one of my colleagues in the majority, who makes a great show of his support for Senator Bernie Sanders (I-VT)–and leading champion of a $15/hr minimum wage, made a spirited defense of the practice of paying seasonal workers a sub-minimum wage.

We can do better, we must do better.

You can’t manage what you don’t measure is an old management adage that is still accurate today. That’s why I am glad that the Village Board unanimously approved a resolution, supported by the Village Sustainability Committee, authorizing the Village Manager to implement policies and procedures for the purposes of benchmarking energy usage in municipal buildings.

Using ENERGY STAR Portfolio Manager, the internet-based tool developed by the US EPA, will enable officials and the public to understand the energy performance of municipal buildings relative to similar buildings nationwide.

This new policy supports the Sustainability Committee’s efforts to qualify the Village for funding under New York’s Clean Communities Program. The committee’s proposal, authorized by the Village Board last month, is an innovative lighting program to make the second floor hallway of the Municipal Building a temporary education center for learning and experiencing different types of energy efficient lighting–If successful, the grant would cover 100% of its cost.

After this public demonstration, education and evaluation, one lighting option could be selected to be the standard for the Village. Currently the municipal building has 977 lights in it. Therefore efficient lighting can generate significant cost savings as well as a substantial cut in overall emissions.

This past Saturday, March 19th, was the annual Croton Dems Soup Supper at the Croton Yacht Club. The Croton Democratic Committee want to thank all the Croton voters who showed up at what was arguably one of our most well attended events ever. Thanks also to all the elected officials, candidates for office and visitors from neighboring municipalities. And special thanks to the Yacht Club and all the volunteers who cooked, baked and served the best food anywhere! See you all at the Black Cow, Friday, March 31st at 7:30pm for our next “Drinks & Dialogue”. 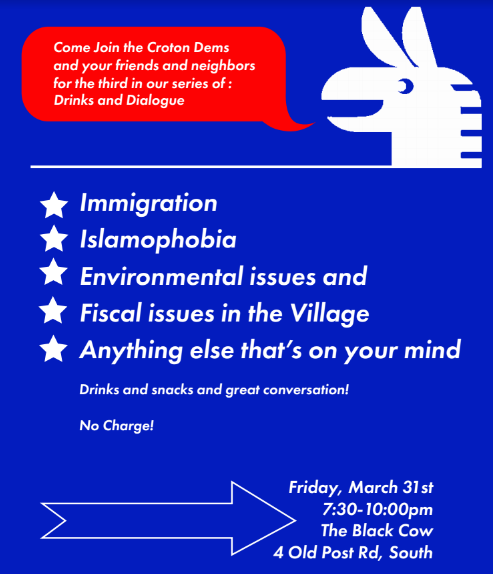 As a member of the Board of Trustees, I wish to acknowledge and thank Police Chief Tramaglini for developing a thorough and thoughtful policy regarding how Croton’s police will respond to immigration-related issues. Chief Tramaglini indicated at Monday’s work session that this has been the Croton police policy for many years which is reassuring. Recently, the Chief put it in words. The policy is available at http://crotononhudson.novusagenda.com for your review.

The Chief’s written statement of police policy appeared to be received positively by the Board. As an outcome of the meeting, and in response to some questions, it was suggested that it be tweaked slightly, based on discussion, to clarify the meaning of some of the wording. I requested that the final wording be included in the Croton Police manual that guides our police department operations. As important, I asked that the Board adopt an official policy, supporting the Chief’s statement, to reflect the posture of the entire Village government in this matter. This would ensure not only that our public posture is known to all, but also that our Police Dept. knows they have our endorsement of their actions.
Lastly, such a policy should be translated into languages most prevalent in Croton and publicized through all normal channels of communication used by the Village. Again, thank you to Chief Tramaglini for his valuable help in articulating in writing an existing policy that provided the basis for the Board’s discussion.

Work Session of the Village Board

(Open to Public and Televised)

NOTE:  This meeting will precede the Regular Board Meeting and will start at 7:15 pm

Events of the past four months have increased local residents’ sense that they need to be involved locally on issues that go beyond Croton. The Village Board has received requests for the Village to take positions on topics that will ultimately be decided by State and Federal legislators. Weighing in on these issues may seem to some as being beyond our purview and, in some cases, even futile.
Recently the Board issued a statement on the Raise the Age bill in the NYS legislature which would raise the age of criminal responsibility from 16 to 18 years of age. The Village statement can be seen from the Home page of the Village’s website.
At its March 20 work session meeting, the Board will consider multiple requests for it to enunciate a policy for ensuring Croton is an open, welcoming community for everyone as a result of several federal policy directives. This has been done by other Westchester municipalities including the Towns of Mamaroneck, Bedford and Village of Irvington.
The Village has also taken a strong position in opposition to the proposed increase of barge anchorages in the Hudson River being considered by the US Coast Guard.
I believe that local government is not just where the day to day pieces of governing occur like plowing, garbage and recycling, parks and recreation, etc. but rather, it is the starting point for higher level authorities to learn and understand what matters to their constituents. To the extent that local governments have not engaged in these discussions in the past, I see a changing trend going forward.
Ann Gallelli

As some readers may know, next week is “Sunshine Week”–Sunshine Week is a national initiative spearheaded by the American Society of News Editors to educate the public about the importance of open government and the dangers of excessive and unnecessary secrecy.

New York State’s Freedom of Information Law (Public Officers Law §87) allows members of the public to access records of governmental agencies, including municipal government. FOIL provides a process for the review and copying of an agency’s records.

However, we can do better. Today, some federal agencies have adopted the practice of posting documents online at the same time they are sent to the requesting citizen—commonly known as “Release to One, Release to All.”

“Release to One, Release to All” establishes many time- and cost-saving improvements to the Freedom of Information Law process. By allowing people to easily access information that has already been released in response to a request, the policy should help avoid FOIL backlogs, avoid duplicative requests and processing, and answer more requests.

In March of 2016, the Chair of Croton United, in response to my earlier statements in favor of “Release to One, Release to All”, wrote a letter to the Gazette calling for the enactment of a “local law that would require every future administration—regardless of political majority—to make proactive disclosure of public documents the standard practice of this village.”

I remain very much in favor of such proactive disclosure, yet I have yet to see a draft local law on this issue. I hope that Croton United’s Chair can prevail upon her governing majority on the Village Board to make this reform a priority.

Click here to read the March newsletter from the Croton Democrats.